These Young Women Made Rape Exams a Little Less Intimidating 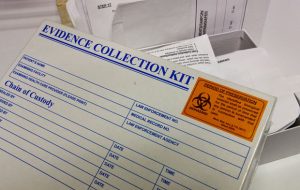 What’s a rape exam? It’s something many have heard of, but unless you work in the field of sexual assault or have experienced one yourself, you might not know exactly what it entails.

So imagine being a sexual assault victim and needing one – already feeling traumatized, and faced with what could be a frightening, invasive procedure.

At the YWCA, the Nurse Examiner Program provides these exams (officially called medical-forensic examinations, and available at no cost, 24/7). The exam is about collecting evidence, yes – but it’s also about healing. Empowering victims. Giving them choices in the aftermath of an event where choice was robbed from them.

So how does a victim facing an exam (and their loved ones) know this? Enter the YWCA’s Helen Claytor Center for Girls Leadership. This after-school girls’ leadership program is a collaboration between the YWCA West Central Michigan and the Michigan Women’s Foundation Young Women for Change, giving girls the opportunity to become involved in social justice and create social change. The young women were learning about the prevalence of violence against women and how it affects teens as well as adults. The group was surprised to learn that the Nurse Examiner Program works with teens – and that they or their friends could easily access it. So, they brainstormed ways to reach teens and ultimately decided on making a video.

The YWCA staff worked with nurses and advocates to gather some feedback, which the girls then used to think about what would be important to see from a teen’s perspective. Next, they drafted a script and arranged who would appear on-camera. They spent an entire Saturday shooting (and starring in) the film, with local filmmaker Michael Johnson directing, editing, and finalizing the piece.

This video will be a huge help in making the services we provide, like rape exams, seem less intimidating and more tangible – especially for young people. Because anyone can be a victim of sexual/domestic violence, no matter their age, race, socioeconomic level, gender, sexual orientation, etc. And if those victims feel more comfortable reaching out, then we’re one step closer to getting them the help they need.

-Michael Johnson, who worked so well with the girls and our staff, and took the time to get to know the program and the goals of the video. He was an amazing resource and we could not have done it without him!
-The Michigan Women’s Foundation for their partnership in Young Women for Change.