WHAT IS THIS BEHAVIOR?! PART 3

What Is This Behavior?!: An Illustration Series

Gender policing is the act of enforcing gender roles based on an individual’s perceived sex (Feliciano, 2015).  Imposing gender roles can range from dressing girls in pink and boys in blue, to physical and/or emotional assault. Children who violate gender norms, especially transgender and gender nonconforming youth, are often bullied and harassed by their peers. These children may also be “corrected” by their parents in shaming ways (Ford, 2017). Regardless of who enforces gender roles, or how they are enforced, the impact is psychologically damaging. It can also cause injuries and contribute to substance use later in life (Bauermeister et al., 2017). The strict enforcement of gender roles also perpetuates sexist beliefs, contributing to a culture of violence. Examples of these beliefs include: boys/men need to be “strong” and independent and girls/women need to be “weak” and protected (Grinberg & Larned, 2018). With such negative impacts to individuals and our communities, we must work to stop gender policing.

We know gender policing is a pervasive issue within our communities, and we all have a role to play in interrupting it. Because of the culture we live in, we have all internalized limited ideas about what gender and sexuality should be, and it is essential that we put in the work to interrogate these ideas. To challenge traditional gender norms means challenging power structures rooted in sexism, racism, homophobia, and other “-isms”. All societies have a dominant culture that prioritizes and rewards certain groups of people over others. Members of these prioritized groups are viewed as “acceptable” or “normal”. They do not have to regularly consider these aspects of their identity when navigating daily life. This means that people who benefit from being a part of the dominant culture have something to lose – whether that might be power, wealth, pride, etc. The dominant culture of the United States prioritizes white people, men, those who are cisgender, and heterosexual people.

An important part of this work is developing an understanding that sex, sexual orientation, gender identity, and gender expression all mean different things, although they are often lumped together and confused for each other. The graphic below provides a visual guide to clarify the differences between these concepts. Ultimately, each individual experiences gender and sexuality differently, and this is something to be celebrated. 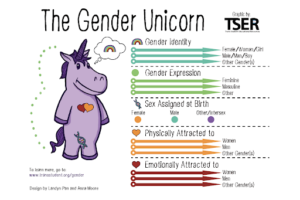 For more information on gender policing, please view the resources below. 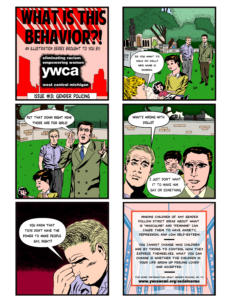