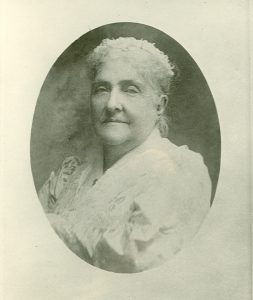 Born in Massachusetts in 1825, Caroline Putnam came to Grand Rapids, Michigan, as Miss Caroline Williams at a time when there was no public school for girls in the small town. At the request of area citizens who desired a school for girls, Dr. Cummings — director of a school for boys — sent East for a teacher who could organize and carry on the teaching of young women. Miss Williams was the person chosen and worked in the girls’ school until 1850, when she married Lemuel Putnam, a druggist on Monroe Avenue.

Lemuel proved an adept businessman and his business thrived. Caroline’s cultural background and gracious manner was equally admired, and she became part of many important community endeavors, including the establishment of the predecessor to the Grand Rapids Public Library. Together Lemuel and Caroline became part of Grand Rapids’ leading citizenry.

Those who knew Mrs. Putnam personally describe her as a person of commanding appearance, yet retiring in disposition, able to do many things and interested always in a constructive social life. Interested also in writing, her efforts seem to express a sweetness and love of humanity. Waterpainting, charades and anagrams appear to have been a prolific source of entertainment during her later years.

Predeceased by both her husband and their daughter, Isabelle, Caroline established a fund in order to carry out her commitment to strengthening our community and its cultural fabric through philanthropy. Mrs. Putnam’s commitment to education and young women fueled her dream of endowing a school where young women could be taught to become good housewives, or good maids, or both — important skills for women of that era.

Mrs. George Wanty, one of the early leaders in Grand Rapids’ YWCA, found herself, among others, engaged in the effort to persuade Caroline to dedicate her bequest to the YWCA in order to establish such a school. Caroline was so persuaded and left her bequest — approximately $300,000 — to the YWCA for the establishment of the Putnam Training School. When the present YWCA building (located on Sheldon Boulevard in downtown Grand Rapids) was constructed in 1921-22, the YWCA was allowed to use $50,000 of this amount for building and furnishing the east side of the second floor. The Putnam School opened its doors in the fall of 1922 with Miss Evangeline E. Stenhouse as Director. The Putnam Training School remained a vital part of the local community through the 1980s, evolving over the years to offer enrichment programs and non-traditional job training for women. Ultimately, it became the foundation of community education in Grand Rapids, fulfilling Caroline’s dream in ways well beyond her imagination.

Caroline’s gift continues to be felt throughout our community. As the corpus of the YWCA endowment, her generosity is the cornerstone and foundation of today’s YWCA.